Once bound to the CB receptors, endocannabinoids modulate the release of mediators and thus play an important regulatory role, particularly on the central nervous system and the immune system.

Where are the cannabinoid receptors located?

To date, two cannabinoid receptors have been identified: CB1 and CB2, each with different signalling mechanisms and tissue distribution.

CB1 receptors are found primarily in the central and peripheral nervous system and in certain peripheral tissues and organs, such as the testis, uterus, immune system, intestine, bladder, retina cells and endothelial cells.

CB1 receptors are highly expressed in the brain regions responsible for movement (basal ganglia, cerebellum), memory processing (hippocampus, cerebral cortex) and pain modulation (parts of the spinal cord, periaqueductal gray), while their expression in the brain stem (which controls, among other things, breathing and circulation) is low.

CB2 receptors are found mainly in immune cells, including white blood cells, the spleen and the tonsils. One of the functions of CB receptors in the immune system is to modulate the release of cytokines, which are responsible for inflammation and regulation of the immune system.

There is growing evidence of additional subtypes of cannabinoid receptors in the brain and periphery. One of these receptors may be the orphan GPR55 G-protein coupled receptor.

Ultimately, the signal generated by binding to these receptors will be different depending on the receptor activated and its location in the body. 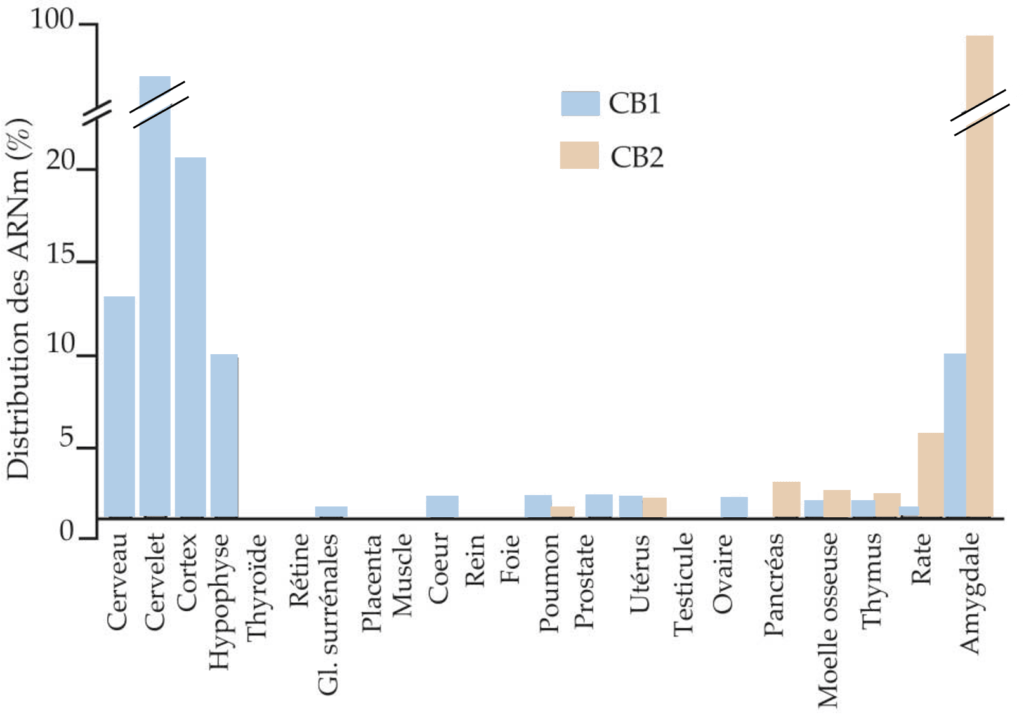 According to IPubli-Inserm. Endocannabinoid system and exogenous cannabinoids.

Cannabinoids of the cannabis plant

More than 140 cannabinoids have been detected in cannabis (Cannabis sativa L.), the most abundant of which are the cannabigerol type (CBG), cannabichromene type (CBC), cannabidiol type (CBD), ∆9-THC type and cannabinol type (CBN). The distribution of cannabinoids varies among different cannabis varieties and usually only three or four cannabinoids are found in a plant at concentrations greater than 0.1%.

The chemical structure of ∆9-THC has been determined since 1964 (Gaoni Y, Mechoulam R. 1964). ∆9-THC (dronabinol) exerts an agonist action at CB1 and CB2 receptors and is considered the most pharmacologically active cannabinoid in cannabis although other compounds in the cannabis plant, with a less well established mode of action, also contribute to some of these effects, particularly CBD.

To summarize, by mimicking endogenous cannabinoids, the active ingredients of cannabis could play an important regulatory role on the central nervous system and the immune system, making it a potential therapeutic target for a wide range of disorders (nausea, pain, inflammation, cardiovascular disease, cancer, anxiety disorders, spasticity, epilepsy, …).

In this report, our objective was to optimize a method for the extraction of cannabinoids from a clone of Cannabis sativa L. #138 resulting from an agronomic test (LaFleur, Angers, …
Lire La Suite >
Article

At a time when France needs to support the strategic health sector, DelleD announces that it has obtained €500k in funding for its research project on cancer treatment. LAFLEUR: A …
Lire La Suite >
Press release

Experimentation with cannabis for medical use

Call for tenders sprayers On 26 March, Health Minister Olivier Véran was in Clermont-Ferrand to announce the launch of the therapeutic cannabis experiment. Medical cannabis will be made available to …
Lire La Suite >
Press release